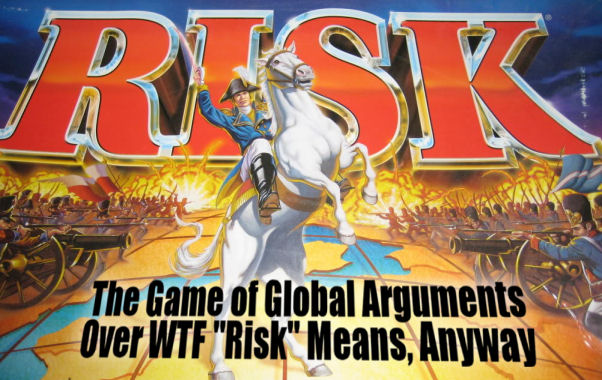 UPDATE 1: I was wrong to say the definition in ISO/DIS 9001:2015 was only the fifth definition of risk within ISO standards. It’s the FORTIETH.  This article has been updated accordingly. — CP

UPDATE 2: I have added a link to an Excel sheet that includes all the known definitions, and their ISO sources. — CP

Inexplicably, the latest DIS version of ISO 9001:2015 injects yet another alternate definition of the term “risk,” pushing it further away from that of the ISO 31000 standard on risk management.

The DIS definition included in the ISO/DIS 9001:2015 is now “effect of uncertainty on an expected result.” This marks the fortieth definition of risk produced by ISO — an organization, remember, founded to standardize things like definitions. As of right now, the following definitions all reside in different ISO standards.

The 40 definitions above appear in over 140 standards currently available from ISO. The list was derived from scouring ISO’s Online Browsing Platform, and may not even be a complete accounting. Originally, ISO 31000 was touted as being the harmonization standard for all those others, but apparently has not succeeded.

For an MS Excel® sheet featuring all the known definitions and their ISO source documents, click here. Note: it is in .xlsx format, for MS Exce® l 2007 or higher.

The DIS of 9001:2015 also seems to want to straddle the fence on whether risk can be both negative and positive, a recent position taken by ISO and being pushed on its TC’s. While the DIS definition includes a “Note 1” acknowledging positive risk:

Note 1 to entry: An effect is a deviation from the expected — positive or negative